THE SOUND OF THE WIND

Gellerup Parken is a neighborhood in Aarhus where around 7.500 residents from over 80 different nations are living in housing blocks that were constructed in the end of the 1960s. Eighty percent of the residents are refugees or have a migrant background and come from the Middle East, Arab States, North- and Central Africa, and the Balkan region.
The howling sound of the wind in Gellerup made me think about crying. After numerous conversations about the phenomenon of crying with people who live in Gellerup and who are related to the neighborhood, I installed two signs and marked three areas in public space where crying is respected.

"Here, crying is respected" Translation in Danish, Arabic and Somali. 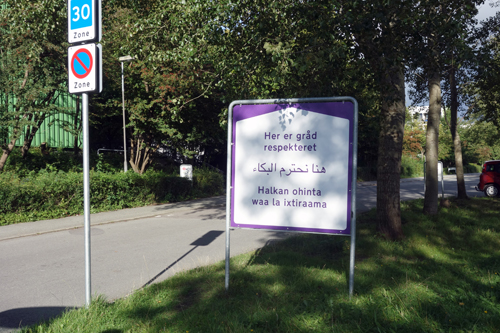 Ella Ziegler in conversation with Grete Aagaard, artist und project coordinator of the Art Platform Sigrids Stue which runs an International Residency Program in Gellerup, Aarhus and of the Project Space rum46 / Aarhus.

Grete Aagaard: How did you come up with the idea and project The Sound of the Wind?
Ella Ziegler: In February 2017 I visited Gellerup for the first time. I lived in Dortesvej 3, in the flat of the International Residency Program curated and organized bySigrids Stue. One night, the wind was blowing through the closed windows of the flat. The howling of the wind kept me awake. So I was thinking about crying because the sound of the wind sounded like somebody was crying in the building for the whole night. This was the starting point of my reflection on the topic of crying.
The howling wind in the night gave me the idea to investigate the issue of crying. The starting point of my first conversations were questions like: Why do I cry? When do I cry? Is crying dependent on nationality, religion, gender or social background? Why is crying, in the first moments, associate with negative emotions and connotations? How is crying related to the private and the public sphere?
When I came back to Gellerup in summer 2017 the nocturnal howling of the wind was replaced by a very similar sound of screeching tires of cars racing through Gellerup—an audible way of how youngsters are claiming their territory in the so called “Aarhus Ghetto.” The howling sound of the tires, which is actually very similar to the sound of the wind, reminded me of the territorial behavior of birds, which mark their territories by their chants.

GA: Why were you doing your research in Gellerup? Could you elaborate on the research part of your project?
EZ: The urban and architectural identity of Gellerup Parken—which originally consisted of 23 housing blocs, a church, a shopping center, schools, kindergartens, a swimming pool, sports areas, playgrounds and community gardens—was planned and constructed in the end of the 1960s. In daily life, it is not necessary to leave Gellerup because it allows for an independent cultural, economic and communal life. I experienced Gellerup as a place of exceedingly cultural, religious and ethnic diversity and coexistence. I got to know people from many backgrounds and with many personal histories and experiences who are living in Gellerup. What connects them all is their present home in Gellerup, which is like a world in a world. I became curious to find out if crying is related to gender and ethnicity, social and religious backgrounds, and if I could learn and research about the phenomenon of crying in Gellerup.
After three weeks of research in Gellerup and Aarhus, I think I can say that crying is deeply connected and dependent to our individual cultural backgrounds, origins and provenances, and to our personal emotional identity. The emotional milieu in which we grow up plays a key role here. Both showing and experiencing emotions—or not showing and not experiencing emotions—while growing up can be a very emotional matter with aftereffects. In a place like Gellerup, where people from more than 80 nations have been settling for more than 30 years, the cultural resonances of their home countries have an effect on daily life, on child education and on behavioral roles.
Conversations with Per Thomsen, the managing social worker and social scientist from the Foreningernes Huis (The House of Associations), Gellerup — a house where 60 different associations find their home — have encouraged me to realize my projects. He has always been a helpful and supporting interlocutor.

GA: Could you talk about your research about crying?
EZ: Crying is personal expression of feelings. It is mainly related to emotions people share and experience together. After some conversations with inhabitants of Gellerup in the Bazar Vest (a local shopping center where you find shops and restaurants that import and sell goods from Afghanistan, India, Lebanon, Iraq, Iran and Somalia as well as Northern African countries), I have realized that conversations about emotions need time and attention. I have also realized that most people do not remember the last situation during which they cried, and they don’t want to tell me about their crying, because I am a foreigner. So I started to make appointments with people in situations that make them cry—I met a midwife in the hospital, an undertaker, the imam of Gellerup Fredens Mosque, the priest of Gellerup Church, a local policeman, a Syrian-Tunisian teenager, a Somalian man, an evolutionary psychologist at the university, and social workers. In the conversations, I realized that crying can be reflected and investigated on may different levels. First, crying has many reasons. There is crying for sadness, for happiness, for shame, for pain, for honor, for empathy, for being touched, for fellowship, etc. And second, crying is perceived very differently depending on the context. Upon first glance, crying is connected to sadness. But if you take a closer look at this phenomenon, it becomes clear that it is mostly an effect that is triggered by a variety of situations.

GA: Why did you install signs that say “Here crying is respected” and establish crying zones especially in Gellerup?
EZ: Crying is a signal for different kinds of emotions. The street signs that I installed at Dortesvej are an encouraging impulse for the people who enter Gellerup to show and express emotions. The signs do not say “crying and emotions are allowed.” They say “crying is respected.” So the sign is an offer to ask yourself if you are respecting the crying of the others.
I have used the design of Danish street signs to create a paradox and unusual situation. The street signs that I installed at Dortesvej encourage you to show emotions. Street signs normally give permission or ban certain behavior to protect security and save lives in public spaces. Street signs normally don’t talk about emotions. I personally do not know a street sign that addresses emotions.

GA: How do you see the link between your research and conversations and the physical signs/crying zones in the area?
EZ: The conversations about crying gave me the idea to put the issue of crying, which happens normally in private space, in the public space. By using the design and font of official street signs, I use the visual identity of official language from the authorities to talk about something private.
In a conversation with young male Arab adults at the Kontaktsted, a meeting point for young adults of Gellerup, I found out that these young men would not allow themselves to cry. Crying means weakness and therefore crying does not fit into the image of male identity. The text on the signs, “Here crying is respected,” tried to flip the coin. I claim with the text that crying is respected in Gellerup. Whether crying in Gellerup is now respected, I still dare to doubt.

GA: How will you use the research?
EZ: The notes from the diverse conversations about crying are going to be the inspiration and background for personal writing. 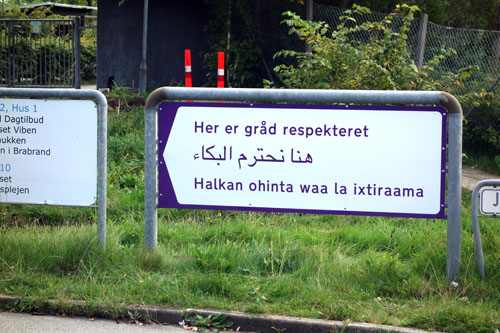 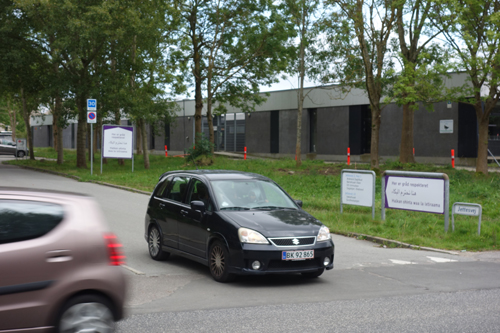 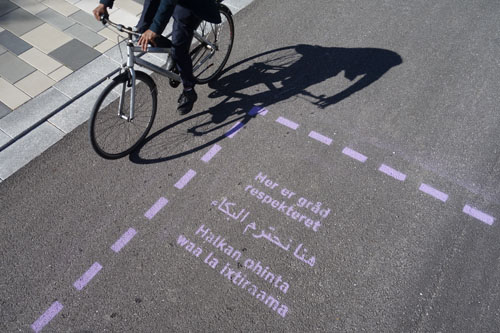 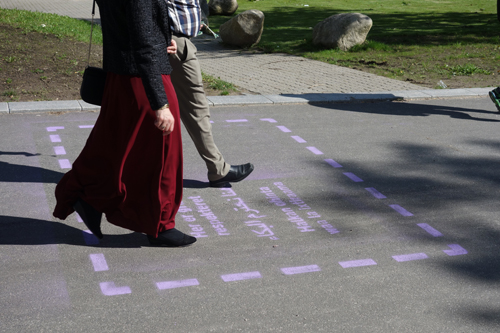 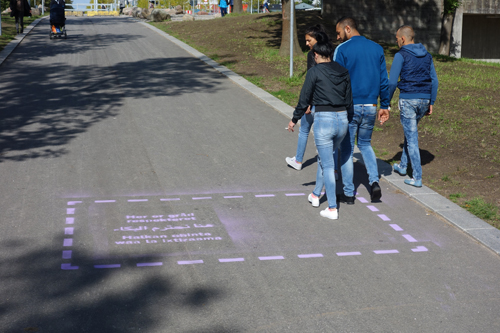 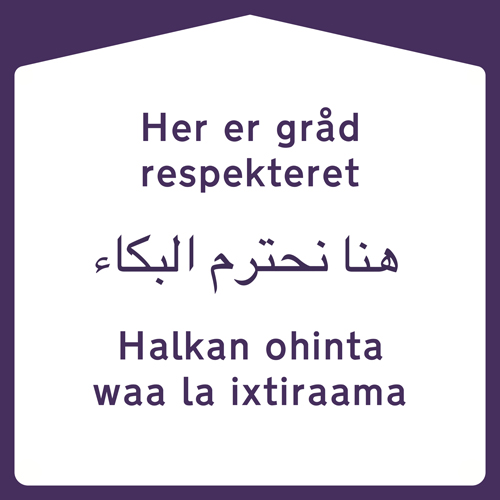